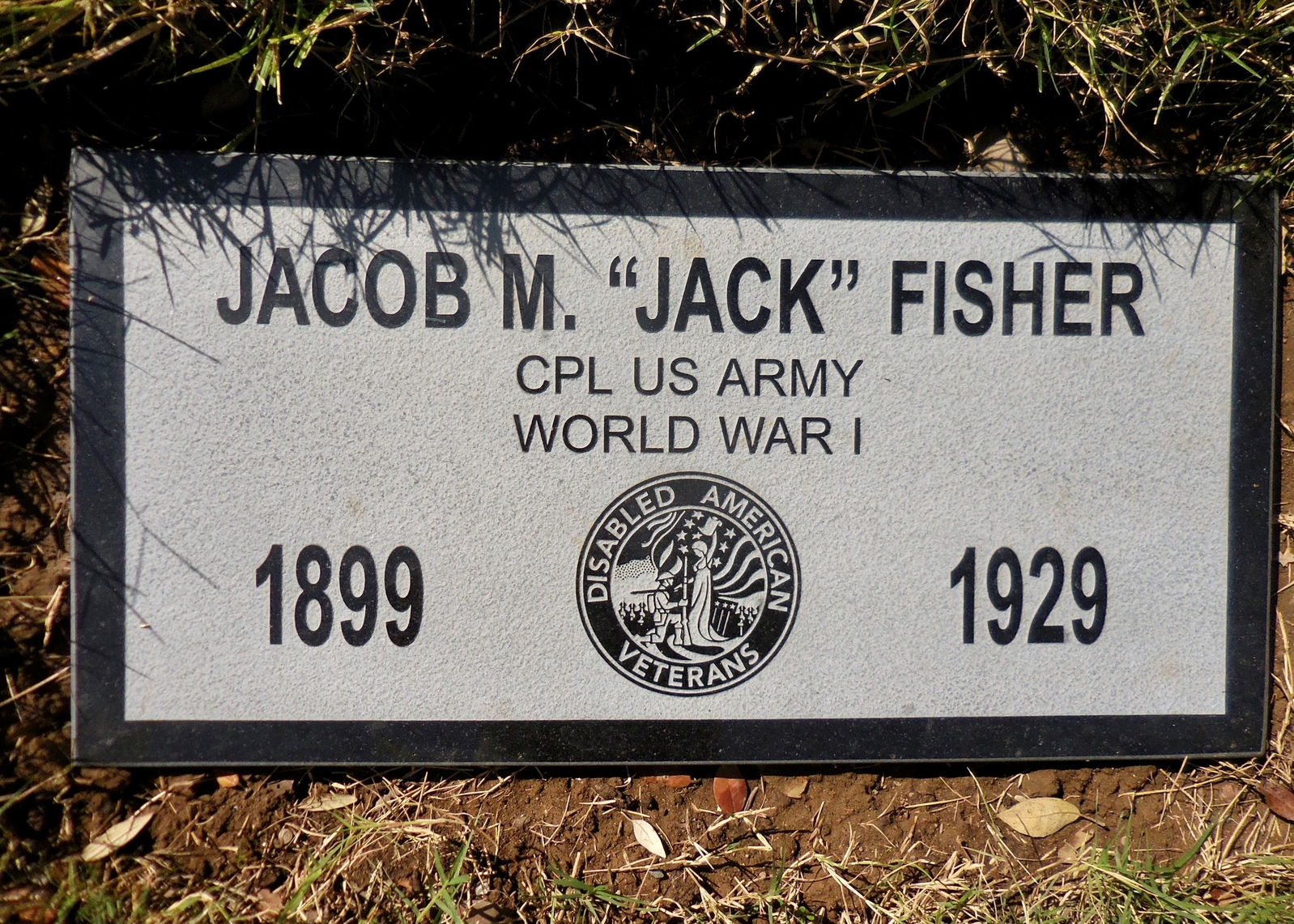 Jack was born Jacob M. Fisher. He is of Dutch ancestry–son of Jacob A. Fisher and Mary Sinnema Fisher. Jack married Frances Baker on June 8, 1927 in Santa Ana. Jack was a renown WWI hero receiving numerous medals from the United States and its Allies.
Medals awarded included the Distinguished Service Cross, the Purple Heart with cluster, the French Croix de Guerro with 12 additional Palms (each for recognition of a separate act of bravery in combat), The French Medaille Militaire, and The Order of The Star British Victoria Cross.

Jack fought in four major battles: Chateau Thierry, Belleau Wood, Verdun and the Argonne Forest. Seriously wounded, he was one of only three men to return alive, carrying his lieutenant on his back.
After his war service he worked for the Herald Examiner in San Francisco and shortly thereafter, for the Santa Ana Register as an artist and cartoonist.

He died of complications from injuries he received on the battlefield. The City of Santa Ana named a park in his honor, “Jack Fisher Park” which was recently re-dedicated in November 2001–“This park has been named in honor of Jack Fisher’s extraordinary sacrifices to the United States of America and continued sense of civic duty.” After his death in 1929, the Disabled American Veterans chapter #23 in Santa Ana was also named after him.

In Santa Ana, Jack was known and loved as one of the greatest heroes of the World war, a son of Santa Ana in whom the city has felt only the keenest pride and for whom it has known the tenderest affection.

Among many orders and decorations the Distinguished Service Cross was the dearest to his heart. Among many more, he had the Croix de Guerre with an even dozen palm branches, from the Italian a glittering star, from Albert of Belgium the highest honor of that government, from England the Victoria Cross and even Marshal Foch’s own individual medal that he had cast for deeds of bravery coming under his direct attention, found its way to America to be pinned on Jack’s breast.

Jack was 18 when he joined the army, thirty when he died.—Santa Ana Register.” This obit in the Alton Democrat continues with “Before he died he was connected with the Santa Ana Daily Register. Jack was a son of Jake Fisher and Mary Sinnema, the parents being well known in Sioux County where they lived several years. Jake was a nephew of Jerome Fisher who used to live in Orange City and Vet. Fisher was a cousin of deceased. Mrs. Fisher the hero’s mother was a cousin of Mrs. J. te Veltrup of Sioux Center.” 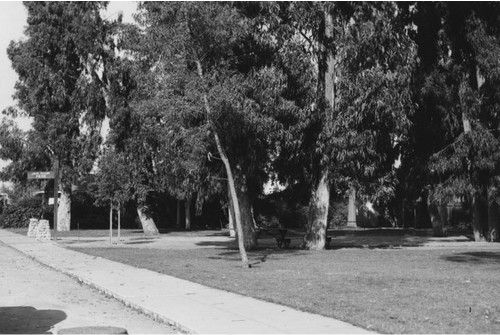 View of Jack Fisher Park in 1966. Eucalyptus trees are in view as well as a sign on the left with the words: Jack Fisher Park.
The park was named in 1932 for a World War I hero from Santa Ana. 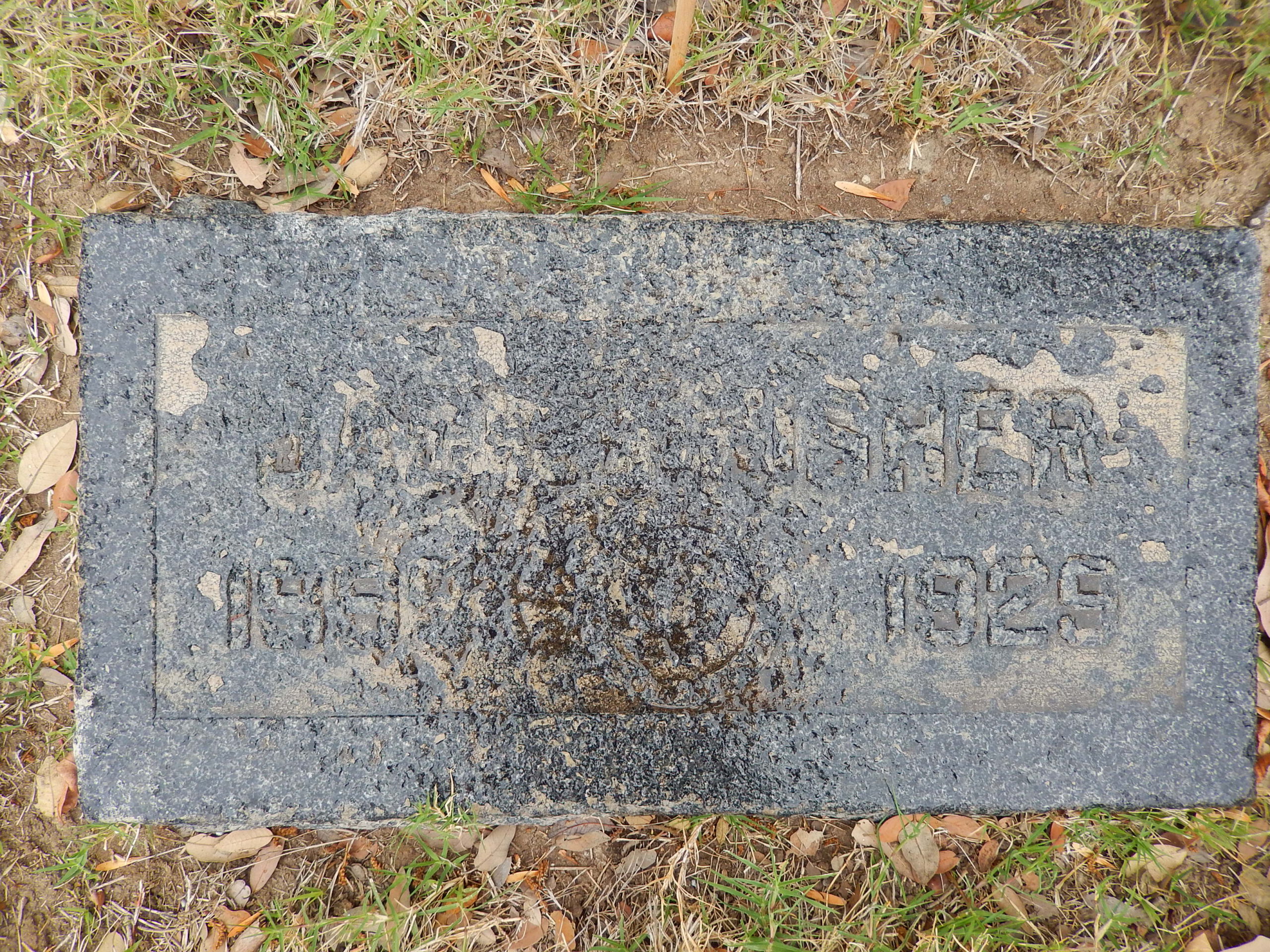